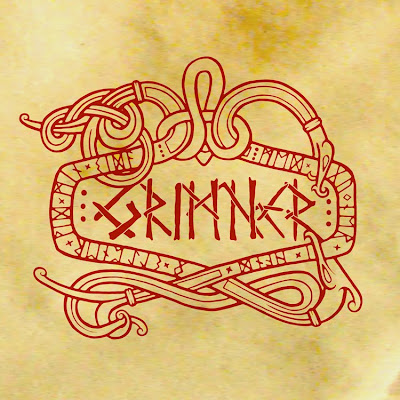 Recently I decided to work together with this promising young Viking Metal band from my area - I will make some artistic stuff for them and provide them with some leather and other crafted things - they will do some promotion work for me ;)

This logo was my first job for them and actually their previous one was the prototype of this one - however it needed a real makeover - so I took the idea and translated it to my own artistic language and actually this is one of my favourites among the logos I have made...
Upplagd av Freki Jungnickel kl. 18:50 No comments:

What is "Alternative Payment"?

It's plain and simple another description of my favorite kind of deals - good old bartering!
I am open for any kind of exchange deals with people who can provide me with arts, cultural goods as books and music, crafts and materials of high quality.
So if you are an artist, craftsman, publisher, label owner or whatever - and interested in my work, do not hesitate to contact me and submit your proposal!
Upplagd av Freki Jungnickel kl. 08:12 No comments:

How to order a custom work from Wodenswolf?

First of all you need to write an e-mail to me - you find the adress in my profile.
Please let me know as exact as possible what you are out for - the more you tell me right from the start the less mails we got to write to get to the finished items ;)
So tell me your wishes with all the details that are important for you!

The next step will be that I create the design for your custom work and provide you with a kind of sketch that gives you an idea about how the final piece will look like.
You get this attached to an email and you can either approve the design or veto against my suggestion and tell me what to change. We will play this game until you have no further suggestions for improvement.

The next step is the payment - for extremely personalized stuff including names, logos, coat of arms etc. I demand the full price in advance, for works that would be alienable in spite of the individual character, only half of the price is demanded beforehand.

Now it's my turn to craft your item - this might take one day, one week or one month, depending on the complexity and the necessary efforts. But at this point you will already have an estimate from my side about how long you have to wait.

As soon as the item is ready, you will get another email with attached images of the finished product.

Then it's time for shipping and we are ready!

The price is 200 SEK for every hour of work. Of course I can't know the exactly needed time prior to work, but I will make an estimation based on my experience.
Upplagd av Freki Jungnickel kl. 07:40 No comments:

Once again the swedish wolves need your help - follow this link and support them with your signature!
[link]

Here's my translation of the text on the petition site for those who are not able to understand swedish - it might be far from perfect, but I think it's enough to explain the whole thing:


On january the 15 th 2011 the starting shot will be fired for another extensive wolfhunt in Sweden.

In spite of the fact that the population is small and fragile, Sweden continues to shot wolves this winter.

Last years' hunt resulted in the shoting of many alpha leaders and that one of the last year's litters was left without their parents. There are no indications that these puppies might have survived. Furthermore, in relation to the size of the wolf population, too many wolves were shot and additionally the death rate has been unusually high after the hunt. The difficult genetic situation hasn't improved and any hunt will further aggravate the state. If genetic strengthening will work out is not known yet.

In 2011 there are plans to shot 20 wolves in the six counties Dalarna, Gävleborg, Västra Götaland, Värmland, Örebro och Västmanlands län. Again about 10 % of the wolf population are supposed to be shot, despite the fact that Wolves are a heavily endangered species in Sweden. The hunt will be carried out in the same way as last year, which means that there are no restrictions taking the wolves into consideration. Neither parental couples with puppies nor offspring from immigrated wolves are protected.

In Sweden there's no possibilty to appeal against the licensed hunt, even though it lacks a legal as well as a scientific basis. Therefore Svenska Rovdjursföreningen, Naturskyddsföreningen, Världsnaturfonden WWF and Djurskyddet Sverige reported last winter's hunt to the responsible EU-commission. A reply is yet anticipated.

The swedish government motivates the hunt with the argument that it obtains acceptance for wolves. However a majority of the swedish folk, even in regions with an occurence of wolves, has already a positive opinion towards wolves in Sweden. On the other hand there's no indication at all that the minorities which oppose the wolf have changed their minds to a more tolerant stance since last year's wolf hunt.

Show the swedish politicians that you take a stance against the hunt and support the wolf!

Make your voice heard and sign the petition below that will be handed over to Environment Secretary Andreas Carlgren.

Take the cahnce and become a member of the Svenska Rovdjursföreningen/Swedish Association for Predators: www.rovdjur.se.

* I also protest against the limitation of the wolf population to a maxiumum number of 210 individuals! Let the population grow and set a new preliminary aim of 400 wolves until there is a plan for a long-sighted viable wolfpopulation in Sweden!

Sweden has one of the most vulnerable european wolf populations; it is small, isolated and genetically heavily impoverished.
Furthermore in Sweden a lot of wolves get killed, legally and illegally. The recent activities are completely out of the authorities' control and there has been a strong escalation in association with the licensed hunt. Just in 2010 about 40 swedish wolves have been shot legally - out of a total population number of approximately 250 individuals. Out of the total death rate of around 60 wolves in one year the majority of cases were due to hunting. Another unknown quantity of dead wolves has to be added due to illegal hunt.

- Any hunt corrupts the situation for the very vulnerable wolf population.

- The plan of releasing genetically unrelated wolves struggles against huge problems and is insufficient.


Collect signatures!
If you want to help with collecting signatures you can download the petition here: [link]

Send the filled in lists to:

Thanks for your help!