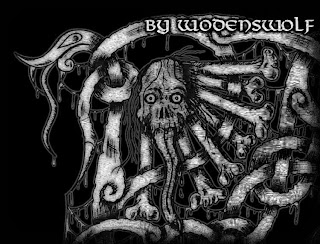 As an artist you have different sources of inspiration, shifting and changing with time, but also constant elements that stand as the pillars of your creations. And while these pillars stand strong and unbroken, they might still be hidden, in disguise and thus invisible for most.
In practice this can have several reasons: lost focus, experiments and so on.
But more important for most artists who have to make a living from their art is the diktat and pressure of commercial considerations.
Actually I am a lucky guy, since alomst everything I create is in harmony with my iron creed and vision. I am able to bring out my message to the masses and most sources of inspiration get their appropriate run. But still, there's something missing.
While I am able to incorporate most of the impact that nature, wildlife, ancient european culture and pagan heritage have on my artistic vision, there's another aspect that is still hidden in the shadowside of my creations.
The things that lie beyond the obvious, under the surface, the obscure, the morbid, the „evil“ forces... It's time to invoke some of these esoteric spirits!

I was spending some time thinking about how to give room to these darker elements without loosing my distinct manner of expression. My vision soon cleared – I wanted to create something that would melt my rather authentic norse ornamental style with the aesthetics and contents of old-school Death and Black and Viking Metal (when I speak of the latter, I speak of old Enslaved, Helheim or Einherjer – not the feeble shit that is labeled as Viking Metal today...)
since this musical genre(s) were extremely influential to me in an artistic and personal way.
The name Nekro Norse was born as an umbrella term to describe this new style.
While „Nekro“ describes the dark and sinister approach of the artworks, the framework and execution will be in a similar „Norse“ style that I am known for.

Nekro Norse is a concept that allows me to dive into the occult and sombre realms of art, still with a strong connection to my roots in germanic/norse culture and old school Metal. I am sure it won't appeal to all my fans out there, but it isn't intended to do so. This is a celebration of my artistic freedom without any bonds or restrictions but my own (bad) taste.
But I am also sure that some of you who have a similar background and interest in Death/Black Metal as well as northern european culture will gladly join me on my excursion to the realms of the dead. 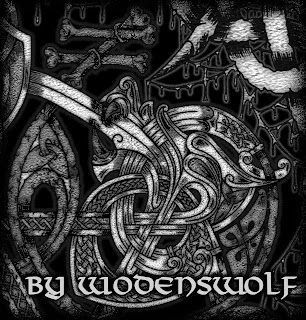 The pictures presented in that post are excerpts from the first full artwork called „The Delusion of the Necromancer“ that will be published on my websites very soon!

Im a pagan and a big fan , Its badass that your mixing the two, I also work with leather your a big inspartion to me and i thank you